Whilst the source is not necessarily endorsed the video itself raises issues about what happened during the largely peaceful protest and the use of violence by police officers.

Whilst the source is not necessarily endorsed the video itself raises issues about what happened during the largely peaceful protest and the use of violence by police officers.

on the 19th December 2010 at 12:46 - A Police Blog
Comments and Reactions
Image
By Jon Cartwright 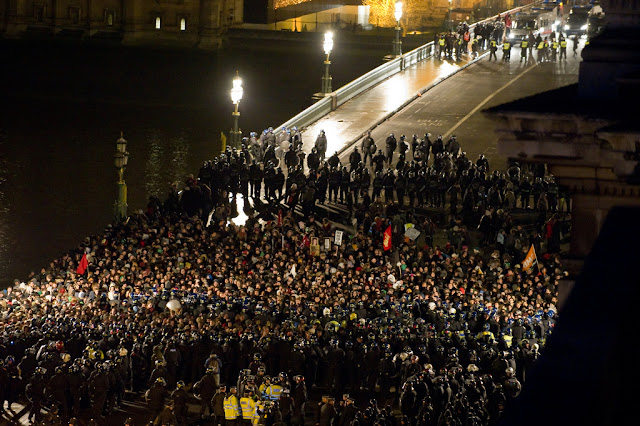 A senior doctor has warned that police risk repeating a Hillsborough-type tragedy if they continue with tactics deployed during the recent tuition fee protests.

The anaesthetist from Aberdeen Royal Infirmary, who gave medical assistance to the protesters, said that officers forced demonstrators into such a tight "kettle" on Westminster Bridge that they were in danger of being seriously crushed or pushed into the freezing River Thames.

The 34-year-old doctor, who set up a field hospital in Parliament Square, said that people on the bridge suffered respiratory problems, chest pains and the symptoms of severe crushing.

"Police had us so closely packed, I couldn't move my feet or hands an inch. We were in that situation like that for hours. People in the middle were having real difficulty breathing.

"It was the most disturbing...

on the 16th December 2010 at 21:39 - A Police Blog
Comments and Reactions
Source: BBC Breakfast News

Did you witness or film these incidents? Please get in touch, this information may lead to upholding a complaint or preventing wrongful prosecution. This is the contact you need to make ASAP. Please spread the word. With large numbers of us organized the media will be forced to acknowledge the evidence. It's important that we do this. Click here.

The last few weeks of student-led protests against the ideologically blunt and financially reckless Tory-Liberal Democrat cuts and the massively short-sighted, brutal and regressive cuts to third level education in particular may well have marked something of a turning point in modern British history. They have won back the power of political protest that was seemingly lost after the defeat of the anti-war marches in 2003. Tony Blairâ€™s smug platitudes about spreading democracy in Iraq saw it dissolve domestically in a sea of bitterness and apathy. The last few weeks have seen people learn once more, indeed seen school children and students teach us, that people do have power and that political protest can be effective. But if these protests have rinsed the smile from Cameronâ€™s face and applied the defibrillator of dissensus to the heart of British democracy they also raise questions about the strategies of protest adequate...

Police: A Note on Violence

â€œThe full force of the law must be brought against violent protesters,â€ David Cameron repeats his mantra, once again, on the evening of 9 December, following the fourth instance of targeted property damage and clashes with the police coming from within the groundswell of student protests against education cuts. The mantraâ€™s combination of â€œforceâ€ and â€œlawâ€ is not intended solely as a call for retrospective legal proceedings, but also summons law-preserving violence in the immediate future. In other words, each repetition of the mantra in the past month has served as foundation and legitimisation for increased militarisation of policing at each successive student demonstration. It has, of course, also served as a clear threat to those who will continue protesting, even if with non-violent methods.

We first heard it from Cameron in the wake of the occupation of Tory headquarters on 10 November, during the 52-thousand-strong, first student march on...

It is eminently possible to understand the much publicised excessive and preemptive police violence at the anti-cut Demonstrations in London last week (and previously).

It is also easy to understand the governmentâ€™s desire to recast the police violence as the violence of the protestors.

What is mystifying is the sustained and ongoing media violence. This violence is of a different order.

The police violence makes perfect sense, even if it perplexed me at first.

At first I could not understand why the police were using such barbaric tactics. I could understand that individual policemen were going to be violent. (I know people who joined the police, and they joined the police for precisely that reason: the chance to be allowed to be justifiably violent. All of them the same: this was their rationale. And these were people I knew at university, by the way; students taking their degrees without having to pay fees, just like me. Indeed, I remember clearly one of them saying to me...

on the 14th December 2010 at 14:52 - A Police Blog
Comments and Reactions
Source: The Guardian
Author: Matthew Taylor

Lawyers have launched a legal challenge to the police tactic of kettling during recent student demonstrations, claiming a breach of human rights.

The lawyers, acting for five of the thousands of demonstrators penned in by police last Thursday, have written to the commissioner for the Metropolitan police, Sir Paul Stephenson,arguing that kettling breaches European human rights legislation.

The latest student demonstration saw thousands of people descend on London to protest about the rise in tuition fees and the drastic cuts to post-16 education.

There were outbreaks of violence and several thousand demonstrators were kettled for hours in falling temperatures in three separate locations in central London.

The five demonstrators â€“ including four sixth-formers â€“ say they were kettled for up to five hours in Trafalgar Square.

Bethany Shiner, 23, the lead claimant, said: "I was with a group of young people who behaved at all times perfectly properly and lawfully. We then found ourselves kettled in sub-zero temperatures."