Police: Some answers to the media questions about Manchester

Firstly, I want to note that I am not a member of Greater Manchester Police, So I can only answer based on my own experiences.

Because they were not expecting what they were confronted with. Every day in the Police we deal with varying levels of situations. We prepare for the worst, we prepare for hostility and violence, but what we often find is that the situations we don’t expect to be violent are the ones that turn out the worst.

I do not know what was reported to the control centre, whether it was a suspects on premises committing the burglary or whether it was a retrospective report of burglary. If it was the former then I would have expected there would have been more officers attending such as a Dog unit or at least another double crewed car, In the Police we want to lock up the bad guys, so when we get a report of someone committing a burglary red handed we aim to get there as quick as we can with as much as we can. It may have been that they happened to be the first...

Police: No Ms May, we do so much more than just fight crime! 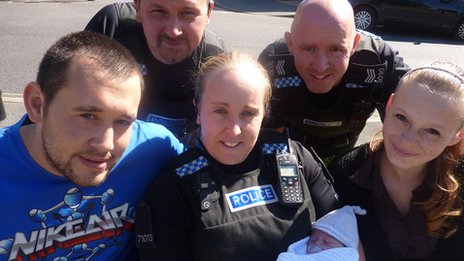 Passing police officers helped deliver a baby in a communal hallway after they were flagged down by a worried father-to-be.

Chelsea Nolan, 20, went into labour at a block of flats in Brightlingsea on 8 September.

With the help of officers, Mr Hayward delivered baby Annie.

The three officers had been dealing with a fight outside a block of flats in Victoria Place when Mr Hayward raised the alarm.

PC Wren, 44, said: “It was a fabulous experience being the first to hold the baby as I passed her to mum who was amazing throughout the whole incident.”

“One minute we were dealing with a fight and...

Police: My birthday goes off with a bang!

A few years ago I had the misfortune of being on duty, whilst it was my Birthday. Â It was generally going well and I had a few hours to go before I could sign off and see my loving wife. Little did I know the peace & quiet monster had it’s own devious plan for my birthday duty.

“PC Prestford, we have had a call from a Ms Fletcher reporting that she has received a concerning text message from her ex-partner, he used to work in the demolition industry and she believes he may trying to get some items he left behind.

Due to the initial description of the call, I went to the address with my colleague Carly. Carly has been a Police Officer for just over 20 years and transferred from a force where they provide their officers with a high level of training and equipment.

We knock at the door and Ms Fletcher answers the door and politely invites us into her house. We all sat down Â around the living room table to find out what exactly it was, that she was...

It has been a while, maybe i’m not an inspector Gadget of the blogging world in that I cannot muster up the motivation to post a new entry every few days (weeks or even months!)

What I want to share with the world now, is interesting new things that I have learnt during my career so far. If some funny incident happens then I will of course include it into the blog, but I will try to keep to the more educational side of things.

(PLEASE NOTE THIS IS NOT MY OWN WORK, IT IS A REPOSTING)

Iâ€™m one of those people Tom Winsor told you about. You remember, he and his barrister friends pontificating around the dinner table about all those coppers with no formal qualifications? But unlike what Mr Winsor said, I am not illiterate, nor am I stupid. And I wonâ€™t be fooled by his nonsense that 40% of us will be better off, low morale isnâ€™t his fault, and his recommendations are a good thing.

I didnâ€™t finish my a-levels or go to University because, having been well educated at a Grammar School, I decided to join the police instead. Safe in the knowledge that although I would do a job that shortens your life expectancy, makes relationships difficult, changes your outlook on life, comes with many restrictions, is stressful, and sometimes very dangerous; I would be looked after, I would do my 30 years, I would have some fun along the way, and I would be rewarded for...

Again it has been a while since I last posted, I got absorbed into my work and the stress of working excessive hours without breaks and insufficient amounts of rest days.

I have came up with an idea and hopefully with Police readers & bloggers contributions, this could move this topic forward and generate some ideas on the improvements we would make if we were in charge. I am talking about serious ideas, which could be achieved. Although I will accept submissions which may require SMT’s to grow a back bone and tell people NO!

I will start with a few suggestions:

1) Police forces not to attend Domestic incidents whereby it is a verbal argument only, if attendance is required as it is suggested that there is a potential breach of the peace is occuring, then the officers should not have to fill in a pointlessly long Domestic booklet.

2) Not attending reports of facebook Â ”harassment” or “threats” unless the person reporting the incident can show that they are at the necessary age to use facebook (16?), they have taken reasonable measures to...

Things have changed yet again in Eastfordshire, I am no longer living the dream in an idyllic rural location. The bosses have decided that the way to win the hearts and minds of the public is to provide even less of a service by moving Â a majority of the officers in my district into the central urban station, which now means that two officers at most may cover the rural side of our division while the rest of the team cover the urban area mostly. Â The only plus side now is that most of the boundaries have been removed, so the urban officers cannot say “not my patch” and in turn respond, if anything major was happening most officers were willing to pitch in, however it was felt to be a onesided contribution more often that not.

So now the rural members of public can look forward to having a single crewed officer or at best a double crewed response car in their area, never fear, the stations the Police Officers have been turfed out of are still open and that they are occupied by PCSO’s, their neighbourhood officer and if they are really...

Police: Erm, Control bit of a strange one!

Sometimes there are very strange things that happen or you see whilst on patrol’ this is the tale of such an occasion.

I was on night duty and making my way to an incident single crewed (as usual). It had been reported that someone was actually having some fun and celebrating a birthday by playing dome music and having a party at their own house at ten o’clock at night. I know the answer already, but ask the controller what am I supposed to do when I get there, as I have no powers that allow me to confiscate any audio equipment, enter the house (not that I’d want to) or instruct them to turn it down by order of any statute. I sit there, knowing that all I can do is give “words of advice” so if they tell me to jog on and close the door in my face there is nothing I can do. The controller reassures me that it is a police matter as it is considered a local priority for us to attend within the hour despite being the responsibility of the local environmental health officer.

Well a lot has changed since I was last on here several months ago!

For a start I have met, dated, moved in with, got engaged to and am currently raising a labrador puppy with my partner Sophie. We have been together six months and the future with her looks very promising. We both have a lot in common, she works for the local council and is fed up of the bullshit and bureaucracy that goes on in her workplace too.

I am sitting here writing this blog, while skipper the black lab sits in his favourite spot, hanging over the back of the sofa with his front paws over the edge looking at the world around him.
Skipper’s life is very simple compared to mine: his day consists of finding pieces of paper to chew up, sleeping, eating, chewing more things, going for a long walk/swim at least once a day. The walks are usually a result of his behaviour becoming out of control. his teeth are very sharp at the moment and i have the cuts and scars all over my hands and arms; I look like a self harmer on overdrive and unlike them it’s because I am getting...

I have been considering doing a Police Blog for a long while now, but until recently the system did not bemuse or anger me as much as it seemed to have done with other people. I have been reading David Copperfield, Inspector Gadget and Ellie Bloggs and they have provided me with a lot of inspiration and opened my eyes into the world of the Police shortly before I decided to get stuck in myself.

Let me tell you more about me, I have chosen the title ‘Dysfunctionalcop’ as I have been diagnosed as having a ‘learning disability’ which in short means that I may lack in certain learning and social skills, but what I have learnt from all of this, is that I make up for this by excelling myself in other areas. I’m a young male officer, looking to do the best job that I can on behalf of the people who call on my help or pay my wages with their taxes. I do not always get it right, sometimes I get it completely wrong or totally miss the point of what a colleague is trying to tell me, which often result in a good laugh after my colleagues have...

Some answers to the media questions about Manchester
No Ms May, we do so much more than just fight crime!
My birthday goes off with a bang!
Slight change of direction
Windsor Explained