on the 17th July 2014 at 8:58 - Posted in Ambulance Blog
This is a post I have written, deleted and rewritten several times. It is a risky post, as it has the
potential to delve into political wranglings that I do not wish to enter. Nevertheless, I want to write about a side to EMS that very few have seen. 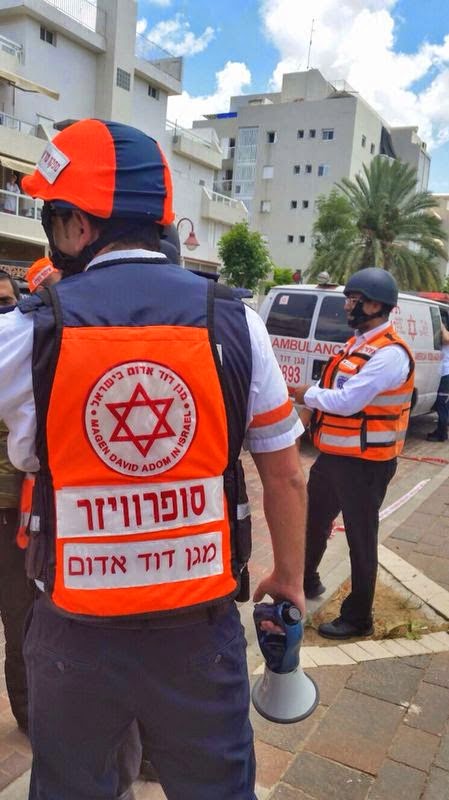 Those of you who have followed this blog for any time, will know that just over two years ago, I left the relatively safe shores of the UK and headed to continue my life and my career in Israel. Just the name of this country evokes images in people's minds that I cannot control. Some for better, some for worse. Living here is a complex mix of normality and insanity, of the usual and the unusual, of war and peace. Few places in the world stir up as much feeling as Israel does. There are lovers and haters, there are the passionate and reserved, but there are very few who have no feelings one way or the other when it comes to Israel. That, despite the fact that too few could point it out on a map or describe its size. (Look on a world map for the eastern edge of the Mediterranean Sea in between Egypt, Jordan, Syria and Lebanon for a dot about the size of Wales, or New Jersey...)
The national ambulance service is called Magen David Adom - Red Shield of David - (follow them on Twitter here) and is an affiliate of the international Red Cross. It serves a population of some eight million people in times of peace and war. It has in the past sent crews to disaster zones such as the Philippines, Haiti and Turkey. It has dealt with mass casualty incidents from which the world has come to learn. It is, however, or at least tries to be when circumstances allow, just an ambulance service treating its population for all manner of illness and injury as is seen in any normal (for want of a better word) part of the world.
The last two weeks have been a little unusual, to say the very least. Treating patients has taken on a different sort of urgency, when the decision making process doesn't only include what the best treatment options are, but also where is the nearest point of safety for when the air-raid siren sounds. Each ambulance now carries ballistic vests and helmets. Enough for each crew member plus one patient.
However, what if there is more than one patient? What if someone is accompanying our patient? If the siren sounds, do we stop and seek shelter, taking time to help our patient out of the ambulance and into hiding and increasing the risk for all of us, or do we keep going to the hospital and hope that the inbound missile heads elsewhere?
We have been sat on station when the siren has sounded. At the same time, a call comes in. The rules dictate that after any siren, we need to take shelter for ten minutes, giving time for the threat to disappear, for any shell fragments to stop falling, for the Iron Dome anti-missile system to do its job and destroy the inbound terror. Do we wait for those ten minutes? Do we follow the rules, or do we break them, heading out for whatever that call is that has just come in? What if the call is for someone having a heart attack? Or someone having a baby? Or for someone who has stopped breathing?
At times when seconds count, can we afford the luxury of minutes?
I'm fairly lucky. I'm not near where most of the missiles are landing. Parts of Israel, particularly the southern region near the Gaza border, are facing dozens of missiles every single day. Paramedics there are making these decisions call by call, minute by minute, whereas I've only had to think about it on a few occasions.
It is somewhat of an understatement to say that these are very strange days and this is a very strange place to be part of the world of EMS. However, it is times like this that the significance of this choice of career is suddenly very much in evidence.
I look forwards to calmer days, where my decision making process goes back to the best treatment and the most appropriate hospital for my patient, and that the list of decisions and thought processes don't include where all the available bomb shelters are on my route from station to patient to hospital.