Be Good. Do Good. 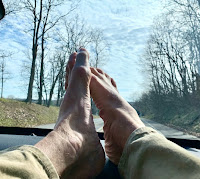 Do your little bit of good where you are.
It's those little bits of good put together that
overwhelm the world.    Desmond Tutu

Recently, my son Cole and I were enjoying an afternoon out of the house, running around town to tackle our to-do list of errands (masked, of course). We stopped at Sam's Club and Walmart, stocking up on our low supplies of food and other necessities. As an added bonus, we enjoyed the people-watching and marveled at the wide spectrum of personal flaws the other shoppers provided us.

It seemed that the Covid-19 crisis had fueled an already blossoming trend of wearing fleece pajama bottoms in public without any embarrassment. People tended to have a greasy quality to them, clearly reducing their shower time as a personal protest to the quarantine guidelines. With masks on, the eyes of these shoppers held the power of conveying a wide spectrum of gratitude, misery, frustration, happiness, and paranoia. I enjoyed interpreting these various moods and realized that zombies were alive and well, living among us.

After these stops, the SUV loaded with fresh supplies, we had just one stop left--The UPS Store. Cole had several large packages he had to send out and the store was just a few short miles away.

Pulling up to the store front, Cole and I got out and walked to the back of our vehicle and removed the packages, overloading our arms to make the delivery in one trip. We walked in together and in a short time had the packages processed. Walking out of the store, stomachs growling, we were talking about what we were going to eat for dinner. With a loaded vehicle of fresh food, our options were many.

And then, amidst our talking, Cole and I saw something that instantly grabbed out attention, almost like a grab and shake of our shoulders, halting our conversation to immediate silence.

Across the parking lot and directly opposite of us, a homeless man sat on a railing that nestled into the red siding of the back wall of a Country Fair. Beside him sat a beat-up grocery cart, filled halfway with tattered plastic bags. He wore a threadbare trench coat over his very thin frame. His hair was wispy and messed from the breeze. His face was smudged and blotchy and his legs and arms were crossed. He was watching us as we stepped from the curb toward our vehicle. Smoking a cigarette, he took a puff, stamped it into the ground and then nodded towards us.

Seeing this man was an immediate reminder to my son and I of just how damn lucky we were. It also gave us the privilege to do a little bit of good.

Cole looked at me and I looked at him. Almost in sync, we both said "Let's give him some food." We went through our bags and pulled out an 18-inch sub, bananas, protein bars, an energy drink and water.

Cole asked if I would take this food to this gentleman and it took me back to the days when he was a child, clinging to my legs as we walked up to a homeless man in McDonalds to give him a a quarter-pounder meal (I Like The Fish). I felt the overwhelming privilege this homeless man gave my son and I to share, however, and walked toward him with the food and drink as well as a $10 bill tucked into the sub wrapping.

Approaching him, his despair became even more apparent. Although the day was chilly but not terribly cold, this man's uncovered feet were pale and roughed up. It was apparent he had probably been walking barefoot and that he also had diabetes or poor circulation.

I stopped in front of him and introduced myself to him. "Hello sir, my name is Jim. Would it be okay if my son and I gave you some food since we just went shopping?" The man didn't speak, but simply nodded yes and held out his hands. I gave him the food and, very methodically, he divided up the ante, putting the drinks in a separate plastic bag that hung from the cart's handle while placing the other food with the $10 bill into the plastic bags within the cart's basket.

When finished, he looked back to me and gave me a smile and quietly thanked me.

As I was turning to leave, I happened upon a pair of bedroom slippers that sat beside him. They were wet, frayed, and had giant holes where I imagined this man's big toes would poke out had he been wearing them.

I looked down at my feet. I was wearing for the first time a pair of new Crocs I had purchased right before the quarantine started. I looked back at him and asked "Will you take my shoes if I give them to you?"

He looked surprised at my question. He spoke again, softly enough that I had to lean into him. "I can't take your shoes." I asked him if he could fit into a size 13 and he nodded yes.

I took off my Crocs and handed them over to him. He took them from me and immediately tried them on. "They'll do," he said, now offering me a bigger smile.

One thing was missing, though. I looked back at my feet and appreciated the warm black athletic socks I had on. Within seconds, I had them off and was handing them over. "I can't take those," he said but, after my insistence, he reached out and took them.

I looked him in the eye and he looked back at me. Eyes on eyes. "I'm Richard," he said. "Hi Richard," I said, "I'm Jim. Do you need anything else?" Although I knew a lot of his needs were beyond what I could offer, I still had to ask. "Do you need to get somewhere or can I call for help for you?" I asked, thinking about how amazing our case managers in our ER were.

He assured me he was okay. "Well then, Richard, it was a pleasure to meet you." I looked him in his eyes one last time and saw his appreciation before I turned and walked away.

Walking across the parking lot and toward Cole, my bare feet ached from the pebbles and cold pavement. Yet it was exactly the walk I needed at that very moment. I could only imagine Richard's discomfort on a daily basis. Cole was standing beside the SUV and had watched everything. The encounter took less than two minutes. And in those two minutes time, Richard had provided a view to a world different than ours. We were grateful.

I handed over the keys to Cole. "You drive," I said. Backing out of our parking space, we waved goodbye to Richard as he was putting on the socks. Driving home, I had my feet up on the dashboard with the warm defrost cranked. It was a luxury not lost on me.

This story of Richard I share with you is not a self-congratulatory pat on my back, I promise. In fact, it's not even extraordinary. Rather, it's a reminder to me and maybe to you that giving truly is better than receiving. It may sound cliche, I know, but it certainly is an undeniable truth. Especially during these uneasy and frustrating times in which many among us might be dealing with new stressors that simply didn't exist in our lives just mere months ago, giving is something that can provide happiness to each of us.

Giving doesn't have to have a monetary value, either. We were just fortunate to have that opportunity with Richard to do so. The cost of giving can be minimal. A phone call. A text. A kind word. A smile. A wave. Giving that comes from your heart and soul is about as good as it gets. Giving provides gratitude. It provides appreciation. It provides love.

Giving also inspires more giving. Your giving, in whatever way you do, may have a ripple effect that you can't even begin to imagine. Who knows, maybe Richard will share his smile more with the world after enough smiles are shared and provided to him. Maybe you will be inspired to give a little more of yourself than the day before. Maybe the person who receives your gift will pay it forward and create a cascade of giving.

Through these times of quarantine and isolation, most importantly, giving increases our social connectedness. This connectedness is vital to our continued good mental health. Imagine the happy that you receive as well as give simply by saying "I love you" or "I appreciate you" to someone in your life who hasn't heard those words for quite some time from you. What a great way to nourish our relationships as well as reap the rewards that giving provides.

Everyday I consciously try to do several good deeds. Many of you out there have received a random text, a phone call, a book in the mail, a gift card, or a compliment from me (sorry, no revealing selfies). Without these connections, I would be less of a human--less compassionate, less happy, and less equipped to deal with my new daily life. My threads connecting me to my fellow man would be frayed. Likewise, I have also been the recipient of so much goodness and giving from so many people, especially during this Covid crisis. This giving from so many people has inspired me to become a better person and give more of myself.  It connects me.

I am caught in the ripple effect of giving...and I like it...I hope you are caught, too.

I would like to thank Richard for providing me with much more than I provided him. To give of oneself is a powerful privilege and he gifted that privilege to my son and me. I hope each of you have the opportunity to give of yourself and feel the beauty that accompanies your actions. I hope you feel the empowerment and connectedness that comes along with doing "your little bit of good where you are."

We are all in this together...

I hope this finds each of you feeling okay while dealing with all of the new stressors created. You are not in this alone. Please, if you have an inspiring story or comment to share, please do on my blog or on my Facebook comments. Be well. Jim