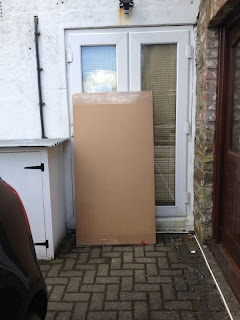 My friend got a delivery of heavy shelving recently. This is where the delivery guy decided to leave it when she didn't answer the door. She was in at the time of the delivery but she just didn't hear him. Her door opens outwards....


Two patients at once after a fight broke out in Covent Garden. Both men had been beaten up quite severely and one had been left unconscious. Both had head injuries but I was more concerned about the man who'd been KO'd than the other one, because, although he had a fractured nose and cheek bone, he was alert, orientated and responding appropriately. The other man began a slow decline from the same state to somewhere relevant to the severity of his injuries.

His skull appeared depressed where he'd been kicked or punched - probably whilst on the ground - and that gave me all I needed to divert him (and his mate) to a Major Trauma Centre (MTC), rather than Accident and Emergency.

We can take serious trauma patients to specific hospitals, where specialist treatment is immediately available. It has to be done with caution, however, using good clinical judgement or, as in the case of this man, instinct. I don't mind getting it wrong if the alternative is that I could take someone to an inappropriate treatment centre and there's a delay in their care. I think that applies to most of my colleagues too.

En route, the man with the broken nose bled all over the ambulance floor; it was difficult to stop the flow until I wrapped a dressing around his head. The other man began vomiting. I'm sure we made the right call.


I'm known for my opinion on binge drinking, especially with young people and I still believe our NHS ambulance services should not be tasked to recovering people who deliberately go out and poison themselves with alcohol. However, there isn't much option and no resolution of the problem is in sight. So, we take them off the streets and to places of safety (usually hospitals) and that's that. But everyone has a duty of care for young drunks when they are in their professional arena. So it was disturbing to hear that a bus driver allegedly told a semi-conscious 17 year-old and his friends to leave the vehicle when he became sick.

Taxi drivers have little tolerance for this either, and I completely understand - they will spend a good few hours cleaning up the mess and will earn nothing while they do it. Bus drivers will have to get their vehicles cleaned too and they will be off the road.

The problem is that throwing a young person off public transport and leaving them in the street might just put them at risk. Years ago, I posted an incident where a taxi driver had taken a teenage female off his vehicle because she'd started vomiting. He left her in a doorway, in the small hours of the morning, in the freezing cold, with very little in the way of clothing to keep her warm. She was left exposed and dangerously vulnerable until someone called 999 and we picked her up. It happens almost every weekend.

In this case, the young man had friends with him but he was still left in the street, surrounded by people waiting for buses. He was almost unconscious when we arrived to take him to hospital. He was very cold and had been sick all over himself.

It may not be appropriate or convenient when a drunken person starts vomiting and messing up your clean vehicle, but it is a simple matter of judgement for anyone to assume that, if they are in such a state, then maybe they should be going to hospital - but not via the street.


Our last job of the night was another head injury but this time it was much more serious. The man had been hit by a taxi and had almost gone through the windscreen and into the cab, such was the force of the impact.

We arrived after the FRU and there was a paramedic and student paramedic dealing with him as he lay motionless on the ground. A small crowd had gathered and were watching and filming, so I asked them to leave the area. I've never understood why people would want to film someone's personal horror. It's not illegal because it's in the public domain but it tasteless and pointless.

There was a lot of blood around and it made the scene hazardous for everyone working there. The four of us managed his airway, started getting IV access and assessed his injuries, which were multiple and major. He was still breathing and still had a pulse, so there was still hope.

HEMS arrived and soon we had blood being transfused and more advanced intervention going on to save the man's life. It took almost 30 minutes to stabilise him and get a decent pulse so that he could be moved. He'd been RSI'd and immobilised fully for the journey to MTC and when we got there he was still breathing and had a better BP than we'd measured whilst treating him in the road.

Heading home after a shift like this invokes two things; a feeling that something worthwhile had been done and a life might be recovered from tragedy, and reflection on the skills and procedures carried out, so that they can be honed further.