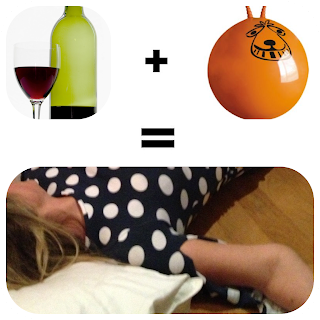 Aww, bless her. She went through a lot of pain and yet allowed me to write this story up. This is Laura and she had an accident.

If you look closely at her right elbow you'll see it's not quite the right shape or size. In fact, she's fractured and dislocated her Humerus so badly that the Radius and Ulna (the lower arm bones) have detached completely and slid upwards and behind the upper arm. This photo was taken by her boyfriend 'Brummy' while she was being treated.

We were called to a 'possible dislocated elbow' and managed to get to the address without being cancelled or diverted (which could easily have happened as it was a very busy night for drunks and they, as always, take priority over broken bones).

When we got into the flat, Laura was on the floor and her boyfriend and three others were around her. There was a bit of giggling going on because alcohol had been imbibed (responsibly in this case) and they were all good mates who thought this was awkward and rather amusing, which it was at times. Although having broken a bone myself, I sympathise completely with the general feeling in the room - you know, if we don't laugh, we'll cry... that feeling.

My crew mate and I started putting her at ease and I explained that I'd give her a little pain relief. She was quite drunk - not stupidly so, but enough to keep her grounded while all this was going on and her arm looked pathetically useless to her. So, I gave her a little morphine and a LOT of Entonox. She was perfectly capable of self-administering the gas and it helped her a lot. So much, in fact, that she was positively bursting with happiness at times. She was like a giggling crippled starfish on that floor.

This was going to be an awkward removal because the flat was a couple of flights of steps up and walking her out was our only option. My crew mate, who is a student paramedic, had never seen such a  serious fracture/dislocation, so I spelled out the plan so that we could move her safely and without causing any further harm if possible. It was not going to be easy.

After a bit more gas and a bit more reassurance, and with all her friends settled down to the reality of her condition, we began to move her from the floor to the ambulance. We had no vacuum splints, which would have been ideal, so I made do with a box splint and padding when I got her out of the flat. Holding her arm stable whilst walking with her was the only realistic option we had, given the position she was in, the position her arm remained in and the environment we had to negotiate.

It was a long, slow and careful process. I felt the bones of her arm shift only once during the move; there was a bit of a crunch as they ground together (crepitus) but it wasn't allowed to happen again.

As soon as she was safely in the ambulance, we packed her arm into the splint and positioned Brummy so that he could keep it stable during the slow drive to hospital. He was more than happy to help and assisted with humour and smiles for Laura. That's the way it should be really. She was in pain and she had a fairly serious injury, but it wasn't life-threatening and she needed to be kept up-beat so that she could bear it.

She told me she'd had several fractures in her life; she seemed prone to them when she had the most benign falls. I suggested she may want to investigate the possibility that she had EDS, or another condition that was causing this.

We popped in to see them both in the Resuscitation Room, where they'd been taken so that Laura could have the dislocation reduced. They were in good spirits (well, Laura was mostly off her head on drugs by then).

The arm was reduced but it failed and the plaster had to be cut open and another attempt made. For a good few hours the poor girl went through painful and uncomfortable procedures to make her joint behave. It finally settled into its anatomical position on the second reduction and re-plaster. 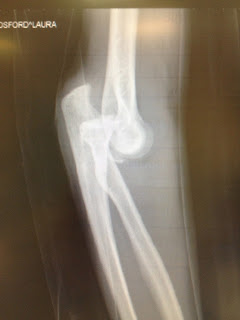 The X-ray shows the extent of the dislocation. Laura had to return to hospital to have bone fragments cleaned out and may have to have pins put into the joint.

And how did she manage to do all this? Well, you are already thinking she was hopping about drunk and fell off the big rubber ball... but you're wrong. She was hopping about, as were the others, having a laugh and enjoying a dinner party with friends, but she successfully completed her hopping fun and dismounted. She then took a few steps around it and fell to the floor so awkwardly that she did the damage that now renders her temporarily disabled.

They had been drinking, yes... but in the privacy of a friend's home. They had been fooling about on a big inflated ball whilst a little drunk, yes... but they were having a dinner party and it was that or Charades. They called an ambulance, yes... but they needed one. This is a genuine accident and there was a real injury. Not one of these people went out to get so drunk they'd end up in a gutter, vomiting their stomach inside out. They were, in fact, pretty sensible, decent and thankful individuals. Brummy had even been preparing to take his injured girlfriend to hospital in the car, rather than 'waste our time'. I can tell you right now that her injury would have been much worse by the time she'd reached hospital if they hadn't called 999.

My sincere thanks to Laura and Brummy for their permission to highlight this call and for their great sense of humour and common sense. I wish Laura the very best of luck with her recovery, and I'll keep you all posted.