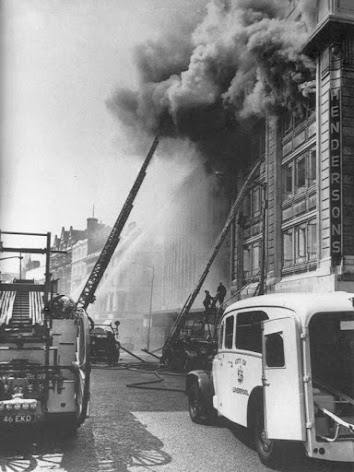 
The blaze led to reforms granting fire brigades legal authority conduct safety inspections of stores and offices and implement escape plans, similar to the requirements of the Factories Act.

One of the rescuers, Firefighter George Taylor, recalled the fire in a BBC interview in 2010:

"When we got to the incident the driver of the turntable ladder had seen the situation, there were people on the ledge about 100 feet up on the fourth floor of the building.

"They'd obviously managed to get out of the windows on to that ledge. A lot of heat and smoke [was] coming out of the building, flames on different levels.

"When the ladder was extended my boss was about to go up but he didn't have what we call a hook belt which was a security device.

"I'd managed to put one of those on so I called to him to let me go past him, which I did.

"As I'm going up the ladder about halfway up the people on the left hand side of the head of the ladder, two of them had been placed by Colin Murphy on to the roof of the building next door which was Bunneys department store.

"Unfortunately when I was about halfway up the ladder the heat and flame from inside the building blew him off the ledge and he went past me and he was killed. He dropped down on to the canopy outside.

"The people on the ledge, having seen what had happened to him they started to move away from where our ladder was positioned and so we had to call to them to stay where they were.

"Eventually I got to the top of the ladder and managed to get five people on to the ladder with me and as were coming down, with the blast of flame coming out of the windows, the two ladies who were amongst the group received burns to their arms and faces. It was only than I realised I didn't have a helmet on."