Hampshire motorcycle traffic policeman Nick Barman was rushing to the scene of an accident when he was knocked off his bike at more than 100mph. He was thrown an incredible 300ft across two carriageways and was left crumpled in a heap, fighting for his life. Paramedics stopped working on the biker they were at the scene for and immediately attended to Barman, a traffic officer with nine yearsâ€™ experience, in a desperate bid to save his life. Here, in his own words, he tells JAMES BAGGOTT the incredible story for the first time

As the paramedic walked up to me I was still conscious and I could see the look on his face. It was a wild stare, one of despair â€“ his eyes were like saucers. â€¨He was carrying a silver blanket and was about to cover me up. He thought I was dead. He couldnâ€™t believe I had survived the accident, let alone was awake and able to talk to him.
I remember patches before that. I was on the early shift that day â€“ February 4, 2013 â€“ patrolling on my BMW RT1200 when I received the call to attend a motorcycle collision on the A31 between Alton and Four Marks in Hampshire.
All I knew was a motorcyclist had come off and was unconscious so it was my job to get there as fast I could. I set off with blues and twos at about 130mph in the outside lane.
As I approached the accident on the other side of the road, a yellow Audi pulled out on me and smacked the side of my bike. He was looking at the accident on the other side of the road and just hadnâ€™t seen me.

Witnesses later said the Audi had made a violent swerve, but I blanked out for a moment and canâ€™t really remember. The next thing I recall was flying through the air and thinking â€˜Iâ€™m off the bikeâ€™.
I was staring at the sky â€“ I was airborne.
I later found out my bikeâ€™s rear wheel had snapped. I was fighting to control it as I crashed into a storm drain, the force of the compression as I came down on the bike bent a metal bar beneath the seat and catapulted me off like from a springboard.
Telematics later showed I parted company with the bike at 114mph.
I landed 300ft away. Luckily a Volvo driver had left a 100ft gap between him and the lorry in front and I landed in that gap.

I flew over the lorry and the ambulance treating the biker I was there to attend.
I donâ€™t remember landing but I do remember scraping along my back with all the gravel and rubbish flying over my helmet and hitting the front of his car with my head and shoulder.
At that point I was still travelling at about 50mph.
I sat there thinking â€˜Iâ€™m awake, I got away with thatâ€™ and I tried to sit up.
All I could think about was my police bike lying on its side â€“ I wanted to move it because I thought it looked bad for the public to see it like that.
I tried to catch my breath, but I felt winded.
What I didnâ€™t realise was that my left lung had collapsed and all my ribs down that side were broken.
I asked the paramedic to help me up, but he refused. He wouldnâ€™t tell me how bad a state I was in.
I kept thinking â€œheâ€™s going to cut off my leathersâ€ â€“ theyâ€™re Â£3,000 a set â€“ and I knew Iâ€™d be out of action for months if he did.
I told him Iâ€™d take them off.
Little did I know that wasnâ€™t possibleâ€¦
I could feel something digging into my back. I kept asking the paramedic to move me, but he wouldnâ€™t. What I didnâ€™t know was it was my right foot digging into my right shoulder blade, the wrong way around.

My pelvis had broken so my bottom half of my body was detached from my top half, and both my legs were bent behind me. All but the spinal cord was in place.
I was drifting in and out of consciousness and the next thing I remember was lying in the middle of the road naked and hearing them say â€˜pneumothoraxâ€™.
Now, Iâ€™ve been to enough collisions to know what that means â€“ itâ€™s a big problem with your lung and I didnâ€™t fancy the massive needle that they shove in your chest to deal with it.
I told the paramedic I didnâ€™t want it, but he asked me to lift my arm up and did it anyway.
I saw the jet of blood spurt out of my chest on to the road and at that point I thought I might actually be injured.
But I wasnâ€™t in any pain, I was uncomfortable, but I remember there was no pain.
I remember feeling twisted, I wanted them to straighten me up but again they wouldnâ€™t.
The worrying thing was the look of panic on everybodyâ€™s faces.
The paramedics were panicking, dropping things and I thought â€˜actually this might be worse than Iâ€™m thinkingâ€™.

I woke up in intensive care at Southampton General and my girlfriend was there.
I had been airlifted from the scene.
Alice and I had been working in the same department in the police force, but no one knew we were together.
We didnâ€™t fancy the mickey taking.
That morning my gaffer had outright asked me if we were an item and Iâ€™d denied it.
Luckily he hadnâ€™t believed me and she was the first person he called after the accident.
No-one thought I was going to make it through the night.
And they knew my son had been killed in a bike accident six years to the day of my crash so they knew it would be a delicate subject.
You just couldnâ€™t make it up, could you?
In hospital the extent of my injuries became clear.
Starting at the bottom Iâ€™d broken my toe, my foot, my ankle, both knees, pelvis, my back, my lung, my shoulder and had a massive deceleration injury to my stomach.
Apparently when you hit 12G that sort of thing happens!
They wanted to amputate my legs. But they didnâ€™t because the doctors simply couldnâ€™t see the point.
They thought I was going to die.
They put me in the MRI scanner and didnâ€™t think Iâ€™d come out alive.
I even had a slight brain injury to top things off.
But I kept on fighting.

I lost four-and-a-half stone in 12 days.
My body went into recovery mode and needed 6,000 calories a day just to maintain itself.
Thatâ€™s as much as an Olympic swimmer.
After four days in intensive care I was strong enough to come out, after four weeks I was back home. Alice had set up my front room just like a hospital. All I wanted was to start walking again.
I had four operations on my legs and at every stage there was the possibility of amputation.
I remember different doctors coming in and running pens down my legs to see if I had feeling â€“ and not believing me when I said I did.
Theyâ€™d then do the same thing with a blindfold on me, but I could still feel it.
They would walk off shaking their heads â€“ to them it was impossible and bizarre.
I learnt to walk again 10 weeks after the accident thanks to a brilliant physiotherapist.
I had to learn the whole process over again, how to shift my weight, how to move my body â€“ you forget walking requires your whole bodyâ€™s movement.
Those were tough days. Being a police biker is a macho thing and having to have my girlfriend carry me, help me bathe, well, that was tough. But I was determined. I could see no reason why I wouldnâ€™t walk again and put the effort in every day to make it happen.
The force was brilliant. They supported me through it all. All I wanted to do was get back out on patrol. I wanted to get on a police bike again â€“ to still be a traffic officer.
After six months I was back on office duties, but I was still on crutches and desperate to get out on patrol.

My aim was to be back on the bike by Christmas. I didnâ€™t quite make that.
I retook the advanced driving test and managed to get back out on patrol in the police cars â€“ four hours at a time â€“ but I soon realised my limitations.
It was uncomfortable in the car, I couldnâ€™t stand for more than 20 minutes, and I still canâ€™t sit in one position for long because of my lower back. When Iâ€™m sitting still my joints start to tighten. It changes with the weather too â€“ I find I can predict the weather just from the feeling in my joints these days.

Eventually the force decided I should take medical retirement. I was gutted.
Iâ€™m glad I went back and completed some of my goals â€“ that way it didnâ€™t feel like it was taken from me completely.
The Audi driver eventually went to court and was prosecuted for careless driving.
He was fined Â£830 and got nine points. I hold no grudges against him, though â€“ it was a lapse in concentration and just shows what can happen when you donâ€™t pay attention.
I havenâ€™t decided what Iâ€™m going to do now.
Iâ€™ve still got a motorbike, but donâ€™t ride it much. I just like to know I still own one and can use it if I want to. The problem these days is convincing my girlfriend to let me go out on it. She says Iâ€™m lucky to be alive. Sheâ€™s sort of got a point. 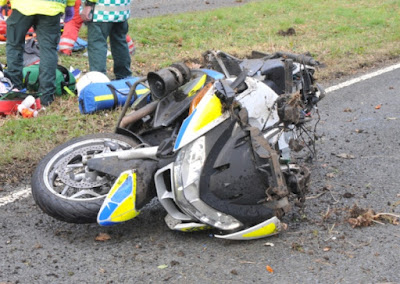 Are We There Yet?
Where Did That Come From?
Chatham House Rules - plus The New Royal Engagement
Empires
Fake News, Fake Drama