written by Old Plod of Plympton 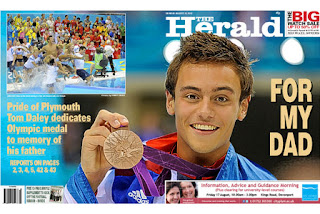 PLYMOUTH has always been rightly proud of its sporting sons and daughters.
Their accomplishments have helped put our city on the map and raised its profile, not just across the UK, but globally. But whatever fantastic achievements went before â€“ laudable though they undoubtedly were â€“ they have been eclipsed by the excitement and outpouring of delight at Tom Daley's bronze medal performance at the London Olympics on Saturday.

Because the Herculean efforts of this 18-year-old were not just a brilliant example of a young sportsman competing with the world's best in a captivating, scintillating and nail-biting contest of skill and nerve. They were a pulsating and impressive demonstration of a young man at the top of his game holding his nerve in the most pressurised circumstances imaginable, and coming away with a prize he had set his heart on â€“ an Olympic medal in his home Games.

But what elevated this from just another story of sporting excellence was the fact that Tom Daley, a Plymouth youngster from a modest background who has captivated the world with his charm and prowess on the diving platform, achieved his dream against the backdrop of the loss of his beloved father, Rob, who did so much to help shape his career.

At the moment of his obvious rapture at winning an Olympic medal in front of a home crowd, he dedicated his prize to his dad, his family his supporters and his friends.

It was a demonstration of why this incredible young man has been able to keep his feet on the ground, despite growing up with the media spotlight trained unrelentingly on him. Why this global Plymouth success story has struck a chord with so many people in our city, the country and around the world. And why Tom is such an inspirational figure to so many people of all ages. The bullies who singled him out in his early teenage years must be beside themselves with jealousy now at his towering achievements. Hopefully they regret their small-minded acts.

But even if they do not, Tom has shown that it is possible to rise above such actions through hard work, dedication and a resolve not to be beaten.

He is a fantastic role model, which is why the City of Plymouth wants to ensure that his home city gives him a hero's welcome on his return â€“ along with his college mate, gold medallist Ruta Meilutyte. She might not be part of Team GB, but she lives in Plymouth goes to school in Plymouth and is trained by a Plymouth coach with a Plymouth club at a Plymouth pool.

Let's show them what they mean to us, and mark their Games successes.