It was Sunday night, the early hours of the morning, my team and I had been on night shifts since Friday and were into the last few hours before we enjoyed a couple of days off.

It had been a reasonably busy weekend but this evening there had been heavy showers so our night shift had been largely uneventful and routine.

We were taking advantage of the lull in calls and enjoying a coffee at the station while I chatted with the team about a few things, I was new to the team and getting to know my officers.
The radio interupted us, asking one of my units to attend a single vehicle RTC (Road Traffic Collision) on one of our main roads, the radio operator had no further details such as if anyone was injured or if the road was blocked.

As it was on a main road I decided that my crewmate & I would head out as well, maybe we would be needed to assist with traffic control.
We jumped in the car, turned on the blue lights and were the first out of the station.

The RTC was only a few minutes away and we soon arrived, on the opposite side of the road I saw a lorry parked with the hazards on, my first thought was 'well that doesn't look too damaged', the road was quiet and no other vehicles were about.

As I started to cross the road the lorry driver walked around the front of the lorry and started frantically waving us over, the look on his face was my first warning.

I strode over to him, he was talking rapidly about a car off the road, I stepped around the lorry, the ground sloped down away from the road, there is a steep 15-20 foot emabankment with numerous trees.
In front of me I saw what was left of a car, the roof was ripped off, pieces of bodywork were scattered through the trees and undergrowth. The body of the car was resting precariously against the trunk of a tree just below the level of the road.

I made my way gingerly around the back of the car and up to the drivers position, I was struggling to keep my footing, slipping and sliding on the steep bank.
As I got to the drivers door I could see the young man sat in the drivers seat, still strapped in, he was badly hurt.

We were waiting for the other emergency services to arrive, I knew that I could not get in a position to do first aid.

I remembered someone years ago telling me that one of the last senses to go is hearing, at that moment the only thing I could do was reassure this young man that we were helping him.

As I stood there I held his hand, I told him the other emergency services would soon be there and he would be on the way to hospital. I told him that his family loved him, and he needed to hold on, he needed to fight and to stay alive. I remember repeating this numerous times, telling how much his family and friends loved him and did not want him to die.

All the while I was aware of the blue flashing lights reflecting off the wet trees, the voices on my radio organising the specialists and road closures, the rain drops hitting me on the head.
Time seemed to pass so slowly, I was praying the ambulance and fire would hurry up and just kept talking to this poor young man.

I heard one of my team shout the ambulance had arrived and a few seconds later a paramedic I knew scrambled down next to me, I gave him a brief summary of what I knew.

The paramedic with a hurried but steady professionalism carried out his checks, feeling for a pulse, listening for breath, all the things they do to check for signs of life.

I remember so clearly the look as he turned to me and shook his head, this young man had died.
There was nothing more I could do for him and we scrambled back up to the road and I updated my control room.

I ensured all the things that needed to be done had been, the road was closed, diversions in place, local media aware, traffic officers were on the way, a collision investigator was attending.
The fire service had arrived and secured the car so it would not fall, we covered the young man up.
Other officers arrived and I handed command of the incident over before heading back to the station.

My team and I headed to the meal room and our half finished cold cups of coffee, a fresh brew was made and we talked things through, the indidual roles we had played, our thoughts on the cause.
We were numb, and soon the early shift were on duty and relieved us, we headed home to our loved ones, skirting briefly over our night, sparing them the horror we had witnessed.

We later found the young man had been going through some relationship issues and had driven whilst drunk.
There is no reason why you should get behind the wheel of a vehicle after drinking.

It is not just you that will be hurt, think of your family, your friends, the other innocent road users, and the emergency services who deal with the consequences.

This incident happened several years ago, I can still remember it vividly, I dont know if that  young man was alive and I felt a pulse, but if he was I like to think the last voice he heard told him he was loved. 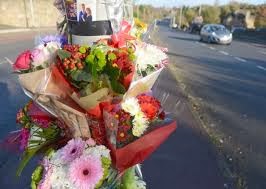