It Would Never Have Happened To Smeaton... 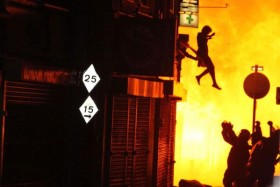 So, after I posted a blog entry entitled "The Blame Game" exactly what do we blame for the causation of the Summer riots of 2011?


The 'original cause', the death of Mark Duggan has been  significantly over shadowed by the riots which took an even uglier turn with the death of six people across the country and the destruction of peoples homes and businesses.


Tariq Jahan eloquently, wisely and whilst still grieving for the death of his Son called on everyone for peace.  The Duggan family also told the nation that they condemned the riots and did not want them carried out in his name.


So, what caused them?


These riots were going to take place no matter what.  An antiques dealer in Tottenham started to receive telephone calls about a week before they took place, asking if he wanted "protection should anything happen"  This would suggest to me that this was going to happen even if Mark Duggan wasn't fatally shot that August day.  This death was merely a catalyst for events that were going to happen, like it or not.


So where do we start this "Post Mortem" of the events that took place.  What caused this Cancer that spread very quickly across this great city and then the country that I love?


It is very easy and quick to blame the police.  The police would have received the blame whether Duggan lived or died, the fact that there was an illegal firearm, fully loaded in the vehicle he was in, keeps escaping people.


Here in lies the problem.


Well, in my opinion, respect is earned.  I hear this a lot in my job "Don't DISS ME" "You need to show me respect"


Funny how quick those who have none for other people are quick to expect it shown to themselves.


"You're only stopping me because I'm black"


No, it's because I saw you slip a knife under your jog top, or you blew through that red light with no care for anyone else and you have no insurance, MOT etc but, no, lets blame it on the fact you're black being the reason I stopped you and not because you committed a crime.


Thank you America! This is another thing I hear regularly.  Including my Mother In Law who is an English teacher.  Some of the story's she tells me, I would quite happily take a machine gun to her pupils.


The fact he meant what he said shows how damaging our culture has become over the years with discipline.


The look of disgust she got from a woman who overheard, speaks volumes, in my opinion of the interference from outside agencies in just simple discipline.


I'm in no way condoning violence towards children but I believe, children need to be taught from an early age that every thing in life has a consequence.


It is my belief that there are too many groups these days who leap out and attack the ways of parenting and even criminalising parents who have smacked their children when the real abusers slip through the net.


Then we have the schools.  In my day I would get the cane.  I got it twice and never again after that I can tell you.  The mere fact that it was on the wall on a plinth above the Head meant it was destined for your hand after the talk was over.  I respected my teachers and in actual fact, I still speak to one on Facebook who sent me for the cane.


Now we have pupils fighting against teachers, parents who, instead of trying to find out why their little darling set fire to the chemistry lab, want to blame it on the teacher for daring to give their son or daughter a detention for throwing things at another pupil.  In some cases, teachers have actually been attacked by parents for showing discipline to their children.


My Mother In Law will not walk down the road of her village or to our house in case one of her pupils sees her.  She's had her house egged and her windows smashed by her own pupils many times.


However, if my Father in law got hold of one of them, he would be the one arrested.


How wrong, is that?


We have football players who think it's ok to have multiple affairs, to commit numerous criminal  offences and be seen to be rewarded with multi million pound contracts.


These people are supposed to be role models.


Gangsta Rap which tells their listeners to kill one another for daring to live in another post code or come from another class.


Single parent mothers who claim they cannot control their child as they have to work every day and that the council took away the local youth club.


Well, I grew up in East London, right where they are building the Olympics.  We had miners strikes, Cold War, recessions, 3 day working week.  We didn't have iPods, Nintendo's, X-Box, PS3's etc.  The latest thing I wanted was a set of clackers which you could bounce faster and faster then lose your knuckles in a blinding flash!


We went out in groups on bikes.  Budgies, Boxers, Strikers, Choppers and Grifters being the fad in those days and we played cricket with a bat made out of floor board and a tennis ball.


We would disappear for hours with our parents safe in the knowledge that we would come back in one piece and with what we went out with.


These days the youth are taught that if you want something, take it.  Kids are bombarded with images of the latest tech and if you don't have it, you're a target in the playground and even the classroom.


We are a society that is quick to take, quick to throw away and quick to blame someone else for your own wrong doings.


I learnt very quickly when I was young that everything has a consequence.


I got into trouble when I was about 11 and my Dad informed me that I would come home from school, do my homework and I would not watch TV for a week.  For me, this was a disaster, early evening TV was a must. I knew that if I timed it right, I could watch the tele and turn it off just before my Dad got home from work.


I didn't do that again, I can assure you.


I was grounded.  My Dad then saw me frantically riding home on my bike with my mates as he crossed the park walking back from the local Underground station.


I learned then too.


I was always told that if I ever brought the police home or got into trouble at school I would suffer the consequences.


Imagine my horror when the local bobby, a big bearded fellow, followed my friends and I to the garages behind my mates house as we collected his bike!


"What's going on 'ere then?  Breaking into garages I see!"


Cue frantic explanations that we were just innocent lads getting my mates bike from his Dads garage.


Praying that Tony had actually locked the garage and what on earth my Dad would say if he heard I was taken down the local nick even though I was innocent.


I feared the police, but respected and even admired them all the same.  I called him "Sir" and I meant that too.  These days I get no respect.


Nowadays it's "See that man, he's the one who will take you away when you're naughty"


The police were a "force" not a "service".  If you got on the wrong end of the police you would expect a clip round the ear and taking home to your parents where you would receive a belting for not only breaking the law but bringing the "Old Bill" round the house!


These days, if a police officer lays a finger on someone it's on the news in seconds, filmed on mobiles and shown on You Tube.


Police officers fear striking back for losing their jobs, their homes, or worse, be imprisoned.


So what is to blame for these riots?


Well in my opinion I would say it's a combination of ill discipline starting with parents, schools which results on a lack of respect for those around.


The "I want it now" and "I'll just take it" culture caused by the mass media marketing strategy from everything from a pair of new trainers to the latest car.  The "upgrades" which means people have to have the latest and you can include football kit.


We didn't have a lot when I was a kid.  Mum only started to work again when we went to school full time so Dad had to pull in a lot of hours.  We got by, but we were well taught that if we wanted something, we had to earn it.


We had to make do and live with it.


If I knew the answer to that I wouldn't be in this job, I would be earning a fortune on the lecture circuit.


But it's my belief that if we allowed teachers to regain the classroom without fear of reprisals, parents to take some responsibility in their offspring instead of expecting others to do their work for them, the police to become a "Police Force" again instead of a "service" doing Social Services job for them and take away the mindless amounts of red tape and the ready critical media we have.  Stop this blame culture, the ambulance chasing solicitors who immediately say


"Where there's blame, there's a claim"


If we get this little bit sorted, perhaps, just perhaps, the world may be a better place.