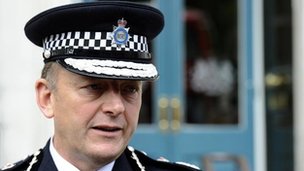 A senior police officer has called on the home secretary to review the powers of police and crime commissioners (PCCs) to remove chief constables.

Sir Hugh Orde, president of the Association of Chief Police Officers, wants to meet Theresa May to discuss the “huge” power granted to PCCs.

He said the current arrangement lacked scrutiny and he branded it “the worst system you can possibly have”.

The Home Office said PCCs had given the electorate a “real say” over policing.

Well, OK he didn’t really… he’s just worried about his own job…lol

PCC’s are a complete waste of time…any money…we all know that…but they are there for good reason: it’s someone to blame other than the government.