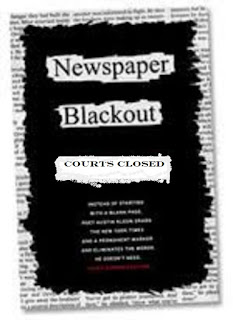 From time to time I have commented on court reporting or the lack thereof in recent times.  What was once a sure way of a local newspaper filling some column and fulfilling its publishing objectives was to have young would be journalists attend the local magistrates court when these courts were truly "local" and return to their editor with a thousand words for publication in the next edition.  Of course that was in pre Facebook, Twitter and Instagram days when using a phone away from home or office usually meant looking for a red box with a glass door near to or on a high street. Those were also the days when shame and shaming went some way in curbing unseemly or unlawful public behaviour. And lo! let there be the internet and mass communication was created and local print media entered the darkness.  I have considered for many years that televising of magistrates courts is a matter of "when" and not "if" and that that this innovation will become reality in the face of opposition from government which indicates increasingly that a more restrictive and opaque justice system would not be unwelcome. Meanwhile there has been an interesting academic study of this reduced public reporting.  A few minutes looking here might be of interest.