TO REPORT OR NOT TO REPORT 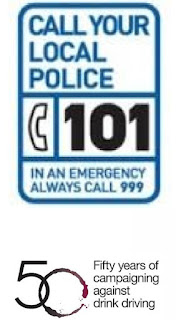 There are occasionally news events, major and minor, that resurrect in me and probably others events long forgotten.  When I read or see on TV that there has been a terrorist explosion in a city whether in this country or not it revives memories of when the first floor of a city multi story car park  in which I had been parked was the scene of an IRA car bomb about twenty minutes after I had left.  Similarly reading this report of a member of the public reporting a possible drink driver to the police I was reminded when I was in a situation regarding a professional colleague.  Another colleague had mentioned that unknown to me at the time that person had a drink problem and had been banned some time previously. A few weeks later when a client/patient/customer was pleased that I was advising her and not "that man who breathed alcohol fumes" I felt on reflection that as he was still driving I should not be merely a bystander to the situation.  After some hesitation and having taken note of his car number from my colleague I called the local police station giving my name and situation as a magistrate to the desk sergeant who assured me that these details would not be entered into any data base.  I reported what I knew. He said that he would alert the appropriate traffic department to be alert near his registered address. In due course he was stopped, breathalysed and sentenced to 28 days custody as it was his third similar offence.  My wife and a couple of close friends to whom I told this story were aghast and were voluble in their disapproval. I had no such doubts then and none now.