THEIR LORDSHIPS` PRICE OF 1000 PIECES OF SILVER 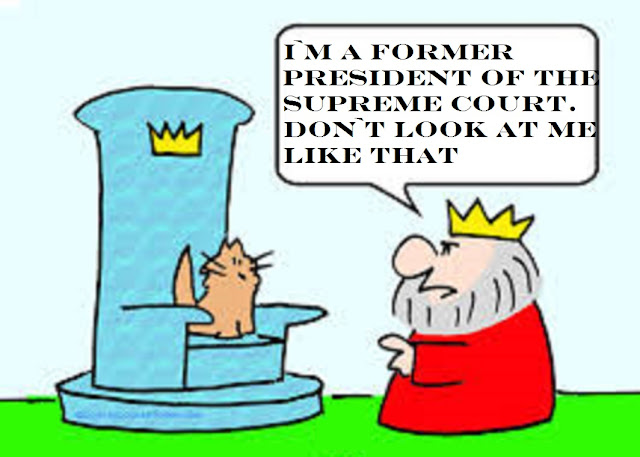 There`s an old adage that a cat can look at a king. In my forays on Twitter I`ve been criticised by the occasional lawyer that I`m only a retired lay magistrate so what do I know.  But there are occasions when that lowly cat can indeed not only look at a king but can offer a loud miewowwww.  The situation in Hong Kong is one of those occasions. The "handover" in 1997 to the Republic of China allowed for certain rights as existed under British rule to be retained for fifty years. The continuation of the legal system was one of those rights. However as is well known to readers China has abrogated these and other rights of HongKongers. The king that this cat is making noises off is no less than a former president of the UK Supreme Court; a certain Lord Neuberger.  It has been announced by the Chinese that he along with another former Supreme Court judge Lord Walker have agreed not only to continue sitting on Hong Kong`s final court of appeal but to extend their contracts for a further three years. This at a time when the ROC has virtually cancelled all freedoms guaranteed to Hong Kong citizens by the terms of the 1997 agreement. Their reasoning at least in public is that they can be of service in preserving the rule of law: what facile nonsense.  The law over which they assert their belief in preserving is the law of an authoritarian tyrant which in recent days has been enforced by the edicts specifying that only candidates approved by the Chinese government will be able to stand for elections to the various local government levels of Hong Kong.  In addition the new security law enacted by China means that its approved leader Carrie Lam can send any cases she wishes to be tried in the mainland. That effectively overrules  any case where she considers a result of the Appeal Court would be detrimental to the interests of the ROC.  I wonder perhaps if the pair of lordships have been persuaded by a nice little earner before they pack up their robes in exchange for trowels and wheelbarrows. The top earner, the Chief Justice Court of Final Appeal, earns $366,750 with the next ranking, Permanent Judge Court of Final Appeal and Chief Judge of the High Court, each making $356,550.  The complete pay scale at 2018 is available here. Others who have taken Chinese silver can be found here.

It is my very humble feline opinion that the pair of aforementioned high flying legal eagles is dancing like angels on the proverbial pinhead in their argument that by being in place they will offer a final resource to restrain the evil hand of Chinese autocracy.  The Foreign Office, for once under the management of somebody with the cajones to speak for a nation with some remaining principles, is pressing their lordships to rethink their position which provides cover for the ruthless destruction of the  last few democratic rights of the citizens of what was once a showcase of British imperialism turned territory.  The situation for ordinary citizens is so dire that of over 5 million eligible it is thought that 300K will emigrate to the UK and many thousands to Australia and Canada. With their enterprise, energy and capital (if allowed so by China) they would make a similar benefit to this country as those south Asians forced from Uganda in 1972 by the murderous Idi Amin. Unlike a previous wave of immigration from Pakistan of non English speaking sharia observing poorly educated individuals English fluent Chinese Hongkongers would be quickly absorbed into our society assisted by a hard working law abiding highly educated existing Chinese minority of 433,000. Hong Kong`s loss would be UK`s gain.  They see very clearly the problems ahead. Their lordships` superficial excuses echoed by the British chairman of the Hong Kong Bar Association that their departure would weaken the court are a permanent stain on the characters and records of two men who were at one time highly honoured for their probity and integrity.  1000 pieces of silver between now and 2024 seems to be the price they have been paid to sully all that has gone before.