WHEN JURIES GET IT "WRONG" 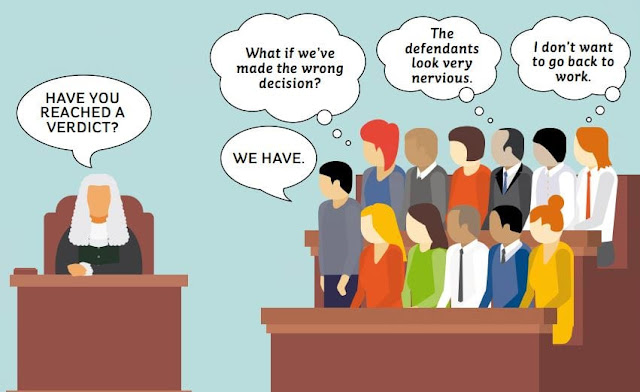 The NHS, the monarchy, the Spanish Inquisition and trial by jury without wasting my reader`s time by asking the question, have one thing in common: they are or were in the case of that Iberian organisation held to be sacrosanct for the societies that created them. The collapse of everything supported in those beliefs by those societies was the prediction of all who argued that their removal or modification would lead to a world of chaos or worse.  A cartoonist`s favourite backdrop of a sandwich board.......THE END OF THE WORLD IS NIGH....... perfectly sums up those believers` attitudes if change were to take place. The NHS is regarded almost in religious terms.  Attempts to improve efficiency without just a shower of money being thrown at it are viewed as contemptible especially by the wokes of the Left and the luvvies on the Right. The Catholic Church seems to have survived and even thrived subsequent to the definitive end of the Spanish Inquisition when the Spanish queen regent María Cristina de Borbón issued a decree abolishing it on July 15th 1834. And with three waiting in line for the succession it would take a brave gambler to bet against the toddler prince taking his place in Buck House towards the latter half of this century.  Standing alone is the current accepted concept of trial by jury which appears to be being questioned as the best form of justice for all those on trial at the crown court.  Northern Ireland has  been subject to judge only trial.  Diplock courts, in which serious criminal cases connected with the Troubles were  tried by a single judge sitting without a jury, were initiated  in 1973. In the ensuing years well over 10,000 defendants passed through the system, the annual average having dropped from about 1,000 at the peak of the Troubles in the Seventies to about 400 in the early Nineties. These figures represented about a third of all serious criminal cases in Northern Ireland, a statistic in itself revealing of the huge impact of the emergency regime on the legal process as a whole.  They were abolished in 2007. To quote Wikipedia: "The Justice and Security (Northern Ireland) Act 2007 abolished the idea of "scheduled offences" automatically tried without a jury. Instead it allows for the Director of Public Prosecutions for Northern Ireland to certify a non-jury trial for any indictable offence provided it was committed either from a motive of "religious or political hostility" or by on behalf of a group which is both proscribed under the Terrorism Act 2000 and "connected with the affairs of Northern Ireland". The act seeks to address the concerns which led to the establishment of Diplock courts by enhancing jurors' anonymity to prevent intimidation, and increasing randomised juror selection to prevent bias.The Northern Ireland Office's explanatory notes for the 2007 act characterise its changes as "repeal" of "the Diplock system" and its replacement with "a new system of non-jury trial". On the other hand courts in such trials have much the same format as the pre-2007 Diplock courts."  When the issue of amending the rules on jury trials is alluded to the legal profession almost with one voice expresses its horror.  Last year with regard to the backlog of cases owing to the pandemic respected QC Geoffrey Robertson proposed the possibility of non jury trials under certain conditions. Robertson, who was born in Australia is quoted as saying,
“We believe sentimentally that trial by jury is a defendant’s fundamental right but why not give them the additional right to choose instead a reasoned verdict from a judge as they have, for example, in most Australian states. That would get some courts back and running, even if barristers and judges have to argue through their face masks and it would be a boon to defendants with good cases who do not want justice delayed”.
I am not aware if any scientific authoritative poll has been taken of lawyers on the subject but I would opine the vast majority would not agree with Mr Robertson.

And that brings me to the case of the six Extinction Rebellion protesters who, despite the judge`s advice, warning, information on the law and explicit direction, were acquitted by a jury last week of causing criminal damage by deliberately spraying graffiti or smashing windows at the Shell building in Belvedere Road central London.  This immediately reminded me of the case of Clive Ponting.  To quote Wikipedia once again, "While a senior civil servant at the Ministry of Defence (MoD), Ponting sent two documents, subsequently nicknamed "the crown jewels" to Labour MP Tam Dalyell in July 1984 concerning the sinking of the Argentine navy warship General Belgrano, a key incident in the 1982 Falklands War. After Ponting admitted revealing the information, the Ministry of Defence suspended him without pay. On 17 August 1984, he was charged with a criminal offence under Section 2 of the Official Secrets Act of 1911.The Prime Minister, Margaret Thatcher, had his pay reinstated once she had been briefed on what had happened. Ponting's defence at the trial was that the matter and its disclosure to a Member of Parliament were in the public interest. It was the first case under the Official Secrets Act that involved giving information to Parliament. Although Ponting expected to be imprisoned, he was acquitted by the jury. The acquittal came despite the judge's direction to the jury, and hence by definition a "perverse verdict". The judge, Sir Anthony McCowan, "had indicated that the jury should convict him". [my bold].  As a direct result a new Official Secrets Act was passed in 1989 to give government greater control of what was classed as "secret".

With regard to that recent ER decision it appears that the jury must have followed the line that the end justifies the means; the end being the political end i.e. a natural outcome of radical left wing opinion that the "victim" opposed ER philosophy. None will ever know if the "victim" were a person or persons would the jury have come to a similar decision.  Would offenders of an extreme right wing group or Islamist persuasion committing such an offence or worse be favoured with a defiance of a judge`s direction and/or being lauded by their peers and fellow believers?  This type of decision making  has been the basis of countless atrocities by individuals, groups and nation states. It is nihilistic. It is a perversion of justice and it will surely lead to legal and/or political ramifications. The corollary which has been expressed here more than once is that the composition of juries and the competence of jurors must be examined in detail by a parliamentary or royal commission; whichever the government considers most suitable. The current situation of jury eligibility as laid down by government is available here.

There is no doubt in my opinion whether or not the entire structure of trial by jury is re-examined that the individual requirements of the individual potential juror must be re-examined.  The most obvious need for a juror whose finding can be life changing for the defendant is a comprehensive understanding of the English language.  Many jurors have English as a second language with varying degrees of fluency.  This should be no surprise to anyone.  The Office for National Statistics (ONS) estimate that in 2019 nearly 9.5 million people living in the UK were born abroad,  just over 14% of the total population of the UK. Of these, 3.6 million were from countries now in the European Union and 5.9 million were from non-EU countries.  A basic understanding of simple statistics or other simple arithmetical concepts is not a requirement for a juror although many legal cases depend upon such an understanding.  Jurors do not have to be British citizens.  This facet of eligibility is one that I personally find hardest to accept.

Lawyers are happy to work within a system that allows a single District Judge (MC) to be judge, jury and sentencer within the magistrates court.  Indeed some would hold that that single person bench is preferable for their clients {and themselves?} than a three person bench of Justices of the Peace. It therefore seems illogical for there to be such opposition in the wigged fraternity to at least a re appraisal of the current jury system.  But as I began this blog logic seems to be a facility missing in this matter.