TAXIS AND THE APPEAL COURT 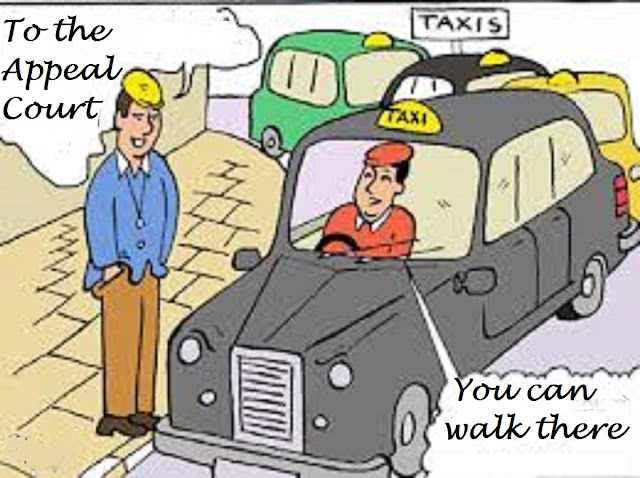 All those with more than a passing interest in criminal law will be well aware that verdicts and sentences at the magistrates court can be appealed at the crown court where a crown court judge and two magistrates will re hear the case.  This is entirely logical and understandable insofar it is rightly expected that under a judge`s scrutiny any deviations in the correct application of the law which occurred in the original hearing will not be repeated. However the magistrates with that aforementioned proviso have equal input into the determination of facts and the logical thinking in the imposition of sentence if indeed the defendant is found guilty. The single most disturbing factor of such process is that many benches do not explain an offender`s right to such an appeal process. For the ever increasing numbers of unrepresented defendants this is an omission for which I have the utmost contempt for my former colleagues.  Indeed I can recollect after making this information clear to an offender that in the retiring room one of the wingers remarked that he had no knowledge of such a procedure as it had not been mentioned at any training session.  Rising up the scale of seriousness it seems quite appropriate that there is in practice a similar process for offenders convicted at crown court. As at 15 February 2021, there are 105 Justices of the High Court (16 Chancery Division, 20 Family Division, and 69 Queen's Bench Division judges), 74 male and 31 female.  Naturally one would expect that those individuals would possess greater intellectual powers than in those of the lower level to enable them to be more expert in the interpretation of the law.  That is not to say that there are no crown court judges who could fulfil the requirements of their senior colleagues. As of 14 June 2021 there are  26 Lord Justices of Appeal and 9 Lady Justices of Appeal. At the top of this legal pinnacle is the Supreme Court where there are currently 12 judges. For a layman it is simply impossible to be certain that each one of those dozen individuals is worthy of his/her position when measured against their colleagues in the tier below. And similarly when a High Court judge is measured in whatever manner is the format against a supposedly higher grade at the Appeal Court can we, the great British public, assume that all is hunky dory at the senior levels of our judiciary?  Thankfully there is a limited number of occasions where there is demonstrated the stark contrast in the reasoning between two levels of decision making.   From one such an extract from a very recent press report reads as follows:-

However, the Court of Appeal’s full decision, which has now been published, pulls her ruling apart, with the three judges saying that it was “extraordinary and not right” that the steps taken by TfL and the Mayor be described as “extreme or ill considered,” nor were there grounds to view them as “irrational.”

They said that Mrs Justice Lang “seems to have given no or almost no weight to the fact that the [decisions taken by TfL] were made on or by 15 May 2020 at a time when the duration and future course of the pandemic were wholly unpredictable.”

The above comments are from the case below a full transcript of which is available here. 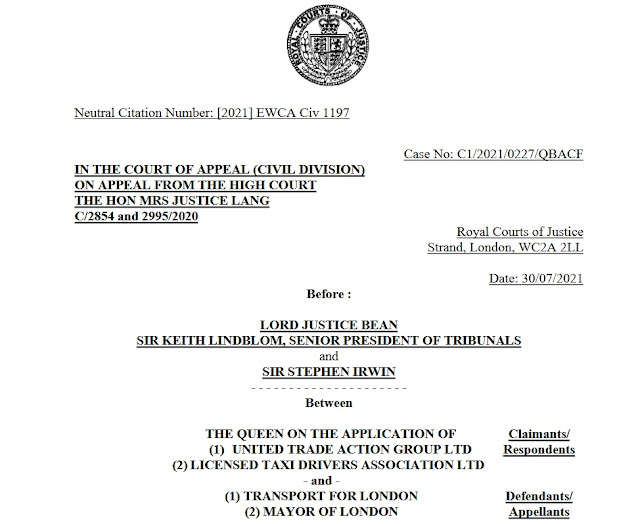 This successful appeal should be a mindset check for those who are responsible for the appointment of our judiciary especially at this senior level. From cases where contrary to official guidance magistrates are publicly criticised by crown court judges to controversial decisions by a split Supreme Court a public must trust in the quality and integrity of the senior judiciary from the Lord Chancellor downwards. When that trust evaporates it is an early signal that similar is happening within our democracy.

PLUS CA CHANGE ...................
A PAT ON THE BACK
ETHNIC PAKISTANI MURDER RATES BELOW THE HORIZON
STAR CHAMBER 2021 STYLE
POLITICS AND THE INTERESTS OF JUSTICE