FROM CLEVELAND TO MONTY PYTHON 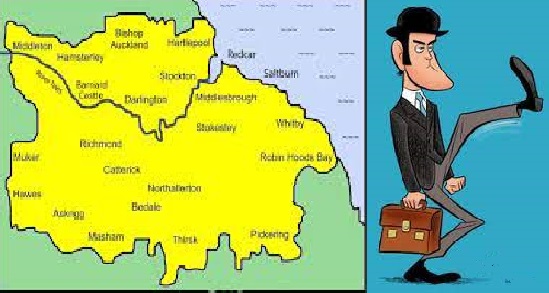 Officially Justices of the Peace are considered by the authorities who govern  them pure and simple as members of the judiciary. But their very status as unpaid part time volunteers supposedly representative of the communities in which they live or work sets them apart.  As a retired member of that fraternity I feel that I can comment from the unique position of having had a foot on both sides of the divide.

There are many commentators being paid thousands of pounds a week to provide their supposedly enlightened viewpoints of the daily events which enter into what can loosely be described as our justice system from alcohol excess to public xenophobia. Recently there have been a few situations which IMHO offer an overall insight into its workings.

The establishment of elected Police and Crime Commissioners ten years ago was supposed to allow the public some influence albeit at a distance over local policing.  Today there are few within the circle of legal influence who would disagree with the abandonment of this circus.  There have just been too many scandals associated with the position. The latest concerns Cleveland Police and Crime Commissioner Steve Turner.  Considering the Cleveland Constabulary was considered the country`s worst this latest revelation I suppose comes as no surprise.  For the people of Teeside and surrounds this must induce or reinforce a lack of confidence in the law and lawmakers; a prelude to dissatisfaction with the norms that must be upheld for a thriving civil society.

Sadly it seems that that brutally abused woman Sarah Everard is forever going to be remembered  by millions for her murder at the hands of a monster in a police uniform. And in the same context the current Commissioner of Scotland Yard is going to be remembered by many who wonder how she was appointed to the job in the first place considering her record of misjudgements which killed one man and ruined the lives of others.  To compound such a record of ignominy it seems she is about to appoint her choice of investigator into the whole sorry mess.  I would call it the schoolgirl marking her own homework.

Hardly a day passes when the term asylum seeker legal or illegal does not appear in a headline or news bulletin. The current Tory Party conference will thousands of words on the topic today and over the course of the event. It has been said that one way to reduce the magnetic effect of this country to those striving to travel here is to turn off the magnet; reduce the attraction. The Home Office has been trying various ways to do just that.  Removing an allowance to make  phone calls  has been declared unlawful by the High Court. The fact must be faced is that this country cannot be an almost open door for the thousands of mainly young men from the Middle East and Africa who annually are landing on our shores however the distress in their native lands. To square this circle with a humane and lawful policy will take the wisdom of Solomon.

Slavery and Trafficking Risk Orders were instituted after my retirement so my knowledge is hearsay.  But it seems they operate akin to various orders around domestic abuse and other matters of disorder where ASBO was the forerunner; civil orders the breach of which become criminal offences. Since then they have proliferated.  They operate on the civil basis of probability and IMHO are open to abuse.  Surely all the supposed brains at the Ministry of Justice can do better?

Northern Ireland is literally a law unto itself. But even there some matters stretch credibility.  One such is those charged with murder being given bail. The structures of this province within the UK have always been an anomaly.  I wouldn`t bet against the unification with the Republic by the decade`s end.

The legal age of sexual consent for heterosexuals in the UK is 16, in Japan it is 13 and in Nigeria it is 11. In Scotland 16 year olds can vote but in England it is not until the age of 18 at which one can also be appointed a magistrate.  Whether or not one`s opinion on these age limits is positive or negative it is sheer fact that a human brain is not fully developed until the early to mid twenties. However owing to a recent Court of Appeal decision puberty blockers can be supplied to children under 16. Of course I cannot comment on the judicial basis of this decision but I do wonder at the outcome.

Self harming is a cry for help.  For those of us with a more rational disposition it is almost unfathomable.  For the sufferers it is tragic.  To perform such an action in public is beyond comprehension. But does it justify the criminal penalty of  a £40 fine, an order to pay £85 court costs, £60 probation costs and a £128 victim surcharge?

It used to be said that judges have no real understanding of the common people ie you and I and live a rarefied life from birth to retirement. Governments of all colours for decades have sought to increase public confidence in the judiciary leading to the establishment of the Sentencing Council and Sentencing Guidelines. It would appear that these initiatives have been by passed by HH Judge Timothy Spencer QC when he sentenced a potential terrorist to read some classic English novels. If only Monty Python were still active: what a sketch that would have made.