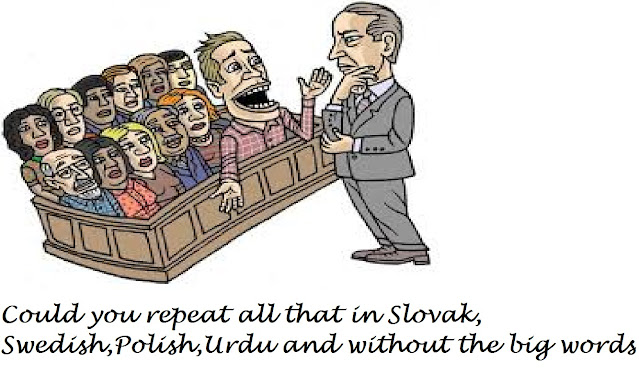 Many dozens if not hundreds of PhDs have been granted and millions of words written on the subject of juries and all that surrounds that ancient concept of a suspected offender`s guilt  being determined by his/her peers.  The whole process once the 12 (15 in Scotland) good men (and women) and true have been escorted to the jury room has been shrouded in secrecy on pain of custodial sentence for those who transgress.  When juries were assembled from a restricted class within the population it could be argued that the variations in knowledge, awareness, education and even religion were minimal.  With the obstacles to jurors` requirements having today been reduced to a bare minimum the aforementioned variations have increased substantially. It is therefore not unrealistic for some jury members to have more knowledge than their fellows of evidence brought before the court.  As an aside when I was active I listened
to a defendant explain, as part of his defence, supposed facts about his eye condition at a relevant time during the alleged offence. This went unrebutted by the CPS under cross examination. As an experienced eye care practitioner I knew immediately that he was lying. When considering our verdict  in the retiring room I informed my colleagues of my opinion on his eye condition argument. He was proved guilty.

My argument then and now is that I contributed to justice being done.  The case for open investigation into how juries are functioning in the age of mass immigration and social media without restraint is needed now more than ever.  Indeed only last week a juror was given a suspended custodial sentence for investigating on the internet certain evidence presented in court. And of course as per my comprehensive post of a week ago on the Colston four who were acquitted of criminal damage, the current establishment view of juries that they and their workings are sacrosanct is as logic based as flat earthers` pre Copernican papacy driven articles of faith.

I have no doubt that the refusal to investigate the happenings within jury rooms will be overturned if only to refute the arguments of a near future authoritarian regime which proposes to impose judge only trials.  And so this self styled Prometheus looks forward to enjoying lawyers` apoplectic reactions to today`s news that magistrates courts are to have powers to double their current maximum sentence of six months custody for certain limited offences.