THE ILLUSION OF LIZ TRUSS AND CHAMPAGNE ECONOMICS 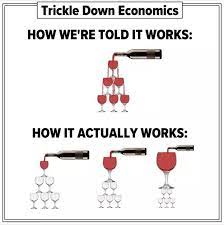 Conservative MPs are being offered inter alia former and unlamented Lord Chancellor Liz Truss as our next prime minister.  This is extraordinary considering what could only be  described as an eleven month episode 2016/17 Lord Chancellor and Secretary of State for Justice which highlighted her shortcomings and unsuitability to hold any job in the cabinet including her current one.


Apparently when the post for her successor was advertised (where and when...who knows?) there was a stipulation that the successful candidate would be required to guarantee tenure of four years.  We now know how seriously that was taken........Truss herself had lasted less than a year. One of the post`s requirements is to defend the judiciary; this she famously failed to do.  Indeed she seemed to veer in the opposite direction when in response to their being branded “Enemies of the people” by the Daily Mail because they ruled parliament had to be given a vote on triggering Brexit she remained silent. Lord Thomas the then Lord Chief Justice also attacked Ms Truss for a “complete misunderstanding” of reforms to cross-examination of vulnerable witnesses in rape trials.  She demonstrated her ignorance of law which she had sworn to uphold by planning to raise legal fees payable after death by up to £20,000 even after a parliamentary committee said the increases were unlawful.

This is but a brief summary of why most legal professionals were glad to see the back of her almost exactly five years ago. Her final Wikipedia entry reads as follows:- " On 10 July 2022, Truss announced her intention to run in the Conservative Party leadership election. She pledged to cut taxes on day one, and said she would "fight the election as a Conservative and govern as a Conservative", adding she would also take "immediate action to help people deal with the cost of living."  Like others trying to be top of the greasy pole she is promising to give with one hand and take away with the other.  What other meaning other than make payments to "help people deal with the cost of living".  Either social benefits are increased by tax rises or the state`s income (taxes) used to fund benefits etc is reduced and increased economic activity is assumed to fund those benefits. The latter is the basis of increasing living standards but it takes time.  She (and others) are advocating the latter being undertaken now.  The champagne effect of trickle down economics from the spending of the very rich to fund the financially deprived as advocated by Ronald Reagan has been shown to be an illusion but like all illusions many are fooled and people fooled like to convince themselves they weren`t.  I hope Tory MPs are wiser than that but I have my doubts.