ARE THERE SOFT JUDGES AND HARD JUDGES? 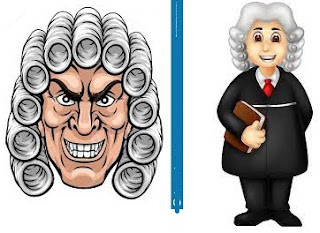 American justice generally is not held in too high a regard here but there are exceptions. The concept of a grand jury is alien to our way of deciding whether or not an alleged criminal should be prosecuted. Although originating in England during the Middle Ages, grand juries are only retained in two countries; the United States and Liberia. It is a group of citizens—empowered by law to conduct legal proceedings, investigate potential criminal conduct and determine whether criminal charges should be brought. A grand jury may subpoena physical evidence or a person to testify. A grand jury is separate from the courts which do not preside over its functioning. Certainly there is a strong argument that in certain circumstances such a method is at least equal to the British way of managing prosecutions.  It is an extension of the jury principle of common citizens deciding a defender`s fate albeit before a formal trial rather subsequent to it. In addition and at the extreme end of citizen participation American juries in some states have the authority to impose capital punishment of offenders whilst judges are the final arbiters in others.

It seems that a general overview is that in America the law and its disposals are closer to the ordinary citizen than in the U.K. where there is no public input into decisions to prosecute and the nearest ordinary folk have to sentencing is a victim statement. Indeed as a non lawyer it seems to me that judges have a much greater say in the management of serious criminal offending than their American cousins. That being the case the sanctions on judges who err is, on the surface, propagated by the Judicial Conduct  Investigations Office but my cynical personality holds the opinion that much or more goes on behind closed doors of the judiciary than in front. That being said it has been well known amongst the legal fraternity for centuries that there hard judges and soft judges; those will take the hardest view within the Guidelines and their more sensitive brethren who lean towards a sympathetic view.  With a dearth of print reporting of crown court trials and those that are reported being limited by the space afforded by cost conscious editors to source two trial reports of the same courtroom presided over by the same judge is an interesting exercise.

The date is July 20th and the venue is Sheffield Crown Court where HH Judge Sarah Wright was on the bench. The offence of causing serious injury by dangerous driving is no laughing matter; it can result in 5 years in custody. However HH decided that this offender`s custodial sentence of two years custody be suspended for two years in addition to  240 hours of unpaid work, a rehabilitation requirement and a driving ban.  Only those in attendance or who buy a transcript can truly pass learned comment but on the basis that the other 99.99% of those who might be interested are barred from an opinion is of course rubbish.

Also on trial in the same court on the same day before the same judge was Ben Oberg who pleaded guilty to controlling and coercive behaviour, common assault and damaging property in Barnsley between August and September, 2020. He too benefited from what seems was Judge Wright`s sympathetic attitude to what many folk on the Clapham Omnibus would consider offending worthy of immediate jail time.  Read the report and decide whether you too have the impression that Mr Oberg is a lucky man to have found himself before a judge who seems in line with the government`s bidding of screaming sentences are not harsh enough but please don`t underrate suspending sentences of custody whilst our jails are almost always near enough full to capacity.